Important note for a problem that othrs might also run into:
I just tried moving the 12 speed cassette to my “nice” wheel and it’s rubbing against the spokes.

This is a hub with a 50mm flange diameter and 17mm center to flange distance (or 48mm dropout to flange) for a 130mm spacing. I figure with either a smaller flange diameter or smaller center to flange (say less than 19.5 for 135mm QR or 142mm TA) it wouldn’t have problems. If I had any, I’d love to try fitting a 0.5 or 0.8mm spacer behind the cassette to make it work. I have a 1.1mm spacer that works, but I’m afraid the smallest cog might not have enough spline to hold onto.

The wheel I’m back to using is a straight pull Shimano RS21 and has plenty of clearance.

I figure maybe mountain bikers might have had experience with this with 11 and 12-speed hubs that also had a bit of freehub overhang, but then again, they also had much bigger cogs. As it is, the cassette I have could have made the spider different, so that the part where it “dips” towards the freehub would be a bit bigger in diameter and also prevented this problem. I hope the new Shimano cassettes don’t have this problem.

Is there no gear trouble??

I’m not sure what you mean. This is a two month old thread. I’ve changed the gear ratchet since then and though shifting isn’t perfect, it’s decent enough and I’m expecting it’ll be better with a Shimano cassette that I believe will be a 3.55mm cog-to-cog pitch, vs. my AliExpress cassette with a 3.63mm pitch. I ordered the Shimano cassette in November and it’s estimated to arrive at the end of next month. Hopefully it will fit on my other hub.

Could I have a link of the casset that you used?

This is the one I ordered, but there are many different vendors that sell the same item, so find whichever ships to you.

How have you found the durability of the SRoad cassette?
They’re very attractive when it comes to weight and price but I’ve seen negative posts about them on other forums.

Where are you located? I can keep an eye out in case a 12 speed cassette pops up sooner from the typical German sellers. 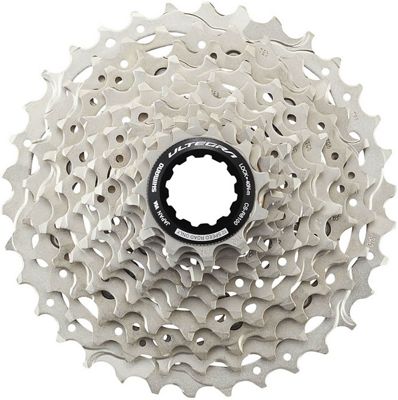 I have a very poor feel for how long a cassette lasts. It doesn’t help that I don’t track the changes I make to my bike.

I know that you can track parts in Strava, but not on the mobile app, so it’s not that useful when I can’t just enter the changes on my phone while I’m in the garage right after I’ve made them. The private notes feature will make it a bit easier to jot down a change, then go in later and record things much later.

This cassette wasn’t my first choice, but I’ve been playing around with 12 speed road shifting since before the Shimano groups were announced. It was mostly ordered so I could test my shifters, anticipating 12 speed Shimano cassettes, hoping they would be HG compatible, but also realizing that the cog to cog pitch might be slightly different.

Where are you located?

I’m in the US, and because of Shimano’s geographical constraints on its sellers, I can’t source from overseas.

Ahhh ok. If you had been closer I would have just offered to sell you mine, especially now that I have my doubts if the cassette will work with my Ratio kit. I bought the parts before Ratio had anything to say on the matter.

I saw your thingiverese files
there have 8 files.
I’m a korean so I’m not good at english to understand your thingiverse explanation.
I gonna coverse with 6800 shifter
and 12speed 8100 casset
Could you tell me what file should I download?

I just updated my project to make the part naming a bit clearer and I narrowed down the dimensions a bit too.

I mentioned in the project that you can probably use your original secondary ratchet, so you really only need to build part PR_15.5deg_20.2dia_10pct_R1.dxf out of 2.9mm thick steel, probably by either laser, water jet, or wire EDM cutting. You can also cut part SR_15.5deg_v3r1.dxf out of 2.5-2.8mm steel.

I’ve been riding on the 15.5 degree version of my new gear ratchet design for only a couple hundred miles, but now seems like a good time for an update.

I bought a GRX derailleur to test how it shifts with the clutch engaged, because I found on my SRAM road shifter + Shimano mtn derailleur conversion (something else I need to put up on Thingiverse) that the clutch reveals some shifting problems. Like, the extra force required to downshift sometimes stretched the cable a bit too much and caused poor shifting. It’s not like the cable is permanently stretched, more like how a spring is stretched. Or something like that. The stock shifter worked fine with the GX derailleur clutch, so maybe it’s not quite like that, or maybe the Shimano clutch has a bit more friction.

Anyway, it shifts well without the cutch, but needs a bit of overshift when downshifting with the clutch, especially in the smaller ring, otherwise I need to back out the adjuster so much that upshifts are slow.

The chainring dependency seems to point to an issue with chain length, like the cage angle, b-tension screw, or maybe derailleur hanger, so I’ll check those last two items.

It still works well enough that I’m going to leave it like that until my Ultegra cassette arrives, maybe in March. Then I’ll see whether I need to change the gear ratchet spacing/angle or not. I’ll also see about a new cable- the optislick cable I’m using hasn’t seen that many miles, but it has been uninstalled and reinstalled a few times, and each time it seats itself in the cable spool differently, it changes how it bends and re-sets itself.

I believe that the original shimano ultegra 12s cassette, with properly machined shifting ramps on the cogs, will give you a perfect shifting experience!

@Mark_H Absolutely loving your work here! I’ve previously tested the RatioTechnology 12 speed conversion for SRAM 10 and 11 speed shifters which worked really well.
I’ve got a bit of a dislike for sram hydraulic brakes and currently run duraace 11 speed that I would love to upgrade to 12 speed so I can run a 1x12 configuration (46t chainring and 11-36 on the back).

I’ve previously used that same 12s cassette you bought from aliexpress and found the shifting to be terrible. The sram 12 speed cassette (albeit noisy with the black coating on the force varieties) shifts very well. Granted this is an XDR only option so maybe not ideal for those who want to keep the regular shimano cassette body.
The fact your upgrade seems to work well with the aliexpress cassette, and Sram AXS 12 speed works fine with that aliexpress cassette and the genuine sram 12s cassettes has me thinking this could be a nice upgrade.

This is the canyon running 1x12 mechanical (sram) on top of tre cime di lavaredo in the dolomites. Keep the 12 speed mechanical dream alive!

I am on 13sp mechanical already thanks to Ratio

I finally got a Shimano 12-speed cassette a couple of weeks ago and the nice thing is that it fits slightly large flange, 50mm hub without rubbing the spokes like the SRODE cassette.

Shifting was a bit off with the 15.5 degree gear ratchet, which was to be expected with the slightly narrower spacing than the SROAD cassette. Even going back to my original 15.4 degree (actually more like 15.38), the shifting is still a little off. It obviously pulls just a little too much cable, so that if the chain is aligned on a cog at one end of the cassette, it’s a bit too far over when you get to the other end. Yeah, I can get it aligned in the middle of the cassette so it’s not as far off at either end, and it seems to be okay but not great.

I’m pretty sure that I put on the 15.4 degree gear ratchet, but it feels almost the same as the 15.5 degree- which I guess isn’t that big a surprise since they’re almost the same, but I was hoping for even better shifting.

I hadn’t posted about this before because I was hoping to get around to taking the shifter apart again to compare to a known 15.4 degree gear ratchet. I swear, I have so many little pieces of laser cut steel all over the place, they’re all looking the same, which is why I’ve started adding features for each size.

I also didn’t even take the time to measure the cassette when I first got it, so maybe the spacing is different from what I’d assumed it would be. I’ll measure that when I have the bike on the workstand.